A wolf from the Indigo Pack in Western Oregon

Oregon Wild and our allies prevailed in federal court today in a challenge of the Trump Administration’s 2020 decision to strip protections from gray wolves.

After several recent setbacks for Oregon’s wolves, we received good news today: A federal district court today struck down a 2020 decision by the Trump administration that removed federal protections from gray wolves across much of the U.S.

This decision reinstates federal protections for wolves in Western Oregon and in 43 other states!

The Trump administration’s push to remove wolf protections was widely seen as politically motivated. Scientific peer reviews commissioned by the Fish and Wildlife Service itself found that the agency’s proposal ignored science and appeared to come to a predetermined conclusion, with inadequate scientific support.

This relisting decision provides our fragile wolf population much-needed protections as they continue down the path toward recovery. According to the Oregon Department of Wildlife’s most recent wolf report, there are only two known wolf packs in Western Oregon.

Unfortunately, wolves east of Highway 395 do not benefit from restored protections, leaving wolves in NE Oregon vulnerable. (You can take action to protect these wolves here).

This victory would not have been possible without supporters like you, as well as the many organizations across the country concerned about the loss of wolf protections. Earthjustice represented Oregon Wild in this lawsuit, as well as our allies at Defenders of Wildlife, Center for Biological Diversity, Sierra Club, National Parks Conservation Association, and the Humane Society of the United States. 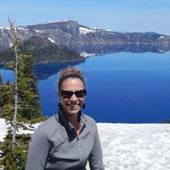 PS: You can support our continued wildlife work by making a donation or becoming an Evergreen Supporter. Thanks for all you do to help us keep Oregon wild.