This week, the Oregon Office of Economic Analysis released the latest quarterly economic and revenue forecast. The news is good. Employment is up and wages are up. The current expansion is now the longest on record.

Money flowing into the state’s general and lottery funds came in $2.6 billion above what officials expected in 2017. That created a situation where Oregon reserve funds are at an all-time high — at more than $3.7 billion — even as economists warn of a possible economic slowdown on the horizon.

Oregon’s unique refund policy also means the state can’t use all of the unexpected money. Under state law, a “kicker” is triggered whenever actual personal income tax receipts come in at least 2% higher than initial projections. In such cases, any money collected above initial forecasts flows back to taxpayers in the form of tax credits.

Oregon taxpayers will see the largest-ever state income tax rebate next year. The top 1% of taxpayers can expect credits of $15,214, while the median rebate will be $346. The average payout to all taxpayers is expected to be $739.

Legislation was proposed this year to limit kicker rebates to $1000 and send the excess to the PERS fund. That measure failed to advance. A total of more than $1.57 billion is expected to flow back to personal income taxpayers after they file their 2019 returns. 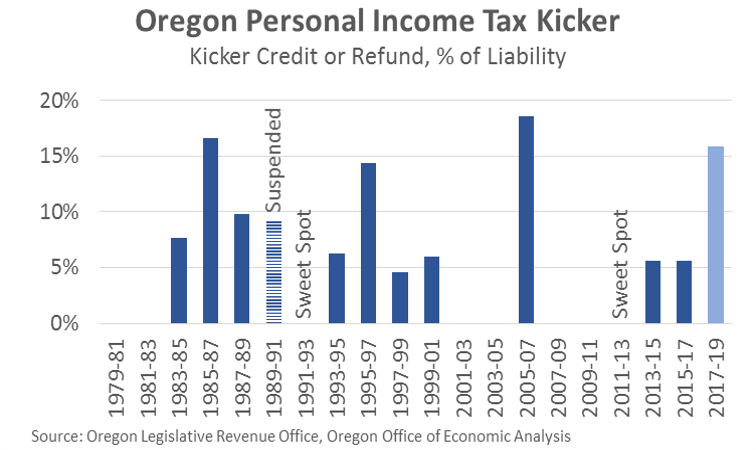 If you missed the Summit or want a refresher, many of the full panels are now online.

Looking for some brief highlights? Please take a moment to hear:

The Coastal Summit is the largest public policy gathering in Oregon outside of Portland. I was pleased to be a part of it and particularly pleased we have this opportunity to advance coastal and coast range concerns.

Newport Dams are at a Critical Stage

Last week I joined a dozen politicians, community leaders and water experts who went underground and into Oregon’s second most dangerous dam — Big Creek Dam No. 2 —in Newport. One reporter described it this way: “People in blazers and strapped-on booties waded through the dark intake tunnel of a dam, flashlights in hand, stirring rust-colored silt into the water. Spiders and large black crickets scurried across the wet walls. And water trickled from seepage holes — vulnerable breakage points inside the tunnel. ‘This is the stuff nightmares are made of.’”

Constructed in 1951 and 1968, respectively, the lower and upper dams are crumbling, and the soil underneath is at risk of liquefying. This jeopardizes the water supply for residents, local industry, visitors and surrounding communities. More to the point, according to Tim Gross, the city of Newport’s public works director and city engineer, when these dams collapse, they’ll destroy everything and everyone in their path.

I was pleased earlier this month when Governor Brown approved funding from the legislature to begin planning and permitting for dam replacement.

Across Oregon, water infrastructure is crumbling and funding is scarce. We have 75 high-hazard dams, which means if the dams fail, they will result in significant damage and loss of life. Of that number, nine are in poor condition and seven in unsatisfactory condition, according to Oregon Water Resources Department.

Big projects in small towns are hard to pay for. But small Oregon communities like Newport are showing that citizen activism can make a difference.